Throughout the month of August, the Luminary team have been pounding the pavement from Docklands to Denpasar in support of the Fred Hollows Foundation.

What started out as an off-the-cuff comment in July about doing a team-wide virtual fun run ultimately came to a triumphant conclusion on 31 August – with 23 participants smashing out a collective tally of 1943km.

The fun run idea initially emerged as a way to keep spirits up, keep us active, and maintain a sense of camaraderie during Melbourne’s second lockdown. The timing was perfect as it happened to coincide with the imminent launch of Fred’s Big Run, an annual fundraising initiative of The Fred Hollows Foundation.

And so began the Tour de Vic.

To help keep up the momentum, we set our Big Run up as a virtual tour around Victoria – the hope being that it might inspire our team members to bring some much needed tourism to regional areas post-lockdown.

Every Monday, participants would ‘check in’ with the distance they covered for the week and the Team Captain would respond with an update on where we got to and some fun facts about the places we passed through. Here’s a snapshot of our journey, which began on 1 August at Luminary’s Melbourne office on Little Collins St. 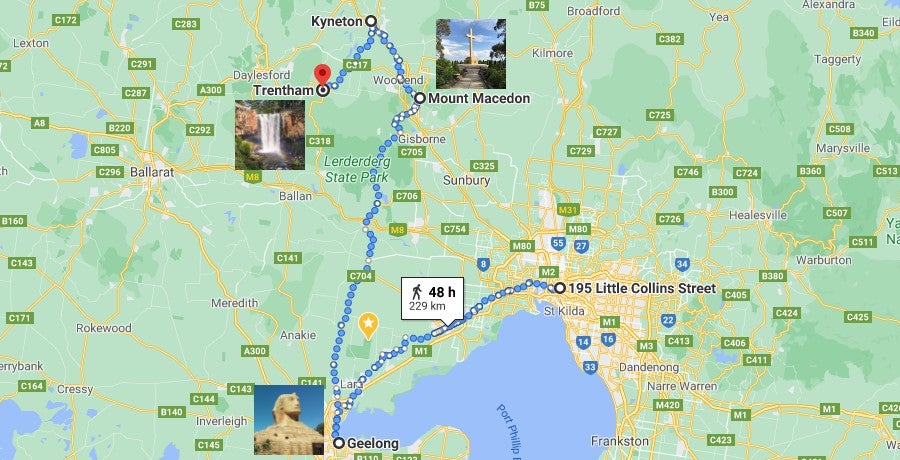 The shortest stage of our journey took us from Luminary HQ out west toward Geelong, and then north from there up to the goldfields region. Highlights included a visit to Geelong’s prized cultural icon – the mighty Sphinx, a sighting of the elusive Macedon Pather near The Mt Macedon Memorial Cross, and a sampling of The Best Pies in Australia at Kyneton’s Country Cob Bakery.

Our Stage One journey concluded in the old mining town of Trentham. From here we took a little side trip out to Trentham Falls – the highest single-drop waterfall in Victoria.

Our first destination for this week was Daylesford. Here, we took a quick trot around the picturesque Lake Daylesford before whipping over to neighbouring Hepburn Springs for a dip in the mineral springs.

From there we headed out west towards The Grampians National Park. En route we decided to stop off at Ballarat's Sovereign Hill and try our luck panning for gold.

On arrival at The Grampians, we trekked up to Boroka Lookout to take in the 180-degree views of Western Victoria. From there, we hoofed it up to Dadswells Bridge (home of the scary-looking Giant Koala).

Still fuelled by the buzz of escaping the murderous marsupial, we headed to Maryborough Railway Station – the longest railway platform in Victoria – to set a new Strava segment record.

Our Stage Two journey concluded at Maldon, where we settled in to watch the sun go down on the second stage of the tour with a copy of the Tarrangower Times, Victoria's oldest continually published newspaper (est. 1858).

Over Stage Three we covered 450km, bringing us from Maldon to the Upper Murray. First stop was Bendigo, the only city in regional Australia to have retained its trams. Figuring it'd be rude not to indulge this, we took a ride on the Vintage Talking Tram Tour, before heading up to Echuca. Here, we took a scenic lunch cruise on the paddlesteamer Emmylou, star of the 80s TV series All the Rivers Run.

From Echuca, we headed south-east to Shepparton. 'Shepp', as it's affectionately known by locals, is famous for orchards. In recent years, it's also become a mecca for bovine art. With over 90 life-sized cows in the 'herd', we decided to see how many we could find.

From Shepp we continued east to Glenrowan with a visit to the Big Ned Kelly – a tribute to a fugitive who somehow became a national icon after being nabbed here by police in the 1880s. Then it was on to Wodonga to behold The World's Biggest Rolling Pin.

Stage Three concluded in a small town called Shelley – with a registered population of seven – on the outskirts of the fire-ravaged Upper Murray.

Stage Four took us through Victoria’s Alpine region. First stop was Corryong, a town that was nearly destroyed by the 2020 bushfires. Corryong is known for its annual Man From Snowy River Bush Festival, inspired by Banjo Patterson’s famous poem. The festival features the epic Man From Snowy River Challenge – hailed as the world’s most gruelling test of horsemanship.

In a crushing blow for the local community, the 2020 event was cancelled twice: first due to the destruction left by the fire and then – after the town rallied together to resurrect it – due to the pandemic.

From Corryong we made our way south through the Nariel Valley. We stopped in at Falls Creek for a well-deserved hot chocolate before heading to nearby Wallace’s Hut, the oldest surviving cattlemen’s hut (built in 1889).

Our next major destination was Mt Hotham. There’s a well-worn hiking track between Falls Creek and Mt Hotham but between Hotham and Mt Buller, we had to step it up Survivor-style. Through this stretch of the journey, we encountered no less than 12 mountain summits. We passed through places with names like Mt Despair and The Terrible Hollow to finally place our flag of victory at the summit of Buller.

Our first destination in the final stage of the tour was Bonnie Doon – gateway to the High Country, but more importantly, the holiday destination of choice for the Kerrigan family (of The Castle fame).

One of our team members suggested we book the night at the famous Kerrigan abode, which is actually listed on Airbnb. At such short notice, we said ‘Tell him he’s dreaming’, but luck was on our side as they’d had a cancellation. So we soaked up the serenity there overnight and the next day we continued on to Marysville.

Our journey by the numbers

While in Marysville, we checked out Bruno’s Art and Sculpture Garden, considered one of the 100 things to do in Victoria before you die. Like most of the town, the gardens were rebuilt after the catastrophic Black Saturday bushfires in 2009.

From there we wound our way through the majestic Black Spur towards the Yarra Valley. We popped into a few wineries and did a spot of hot air ballooning before eating our collective bodyweight in chocolate at the Yarra Valley Chocolaterie.

After that, we legged it down to Phillip Island for a tour of Big Things: from The Big Worm in Bass, to The Big Wave and The Big Cows in Newhaven, and on to Cowes for The Big Tap and The Big Koala (not to be confused with the scary-looking Giant Koala from Stage Two). Just to restore the balance, we finished up with some little things, closing out the evening with the Fairy Penguin Parade.

In the morning, we jumped on the ferry over to Crib Point on the Mornington Peninsula. We then headed inland to Main Ridge to pick a few strawberries to fuel us on the home stretch. As no long run would be complete without a post-run coffee – and because we hadn’t quite had our fill of Big Things – we rounded the journey out with a pit-stop at George’s Gourmet Coffee with its Big Coffee Maker before heading home to George’s on Little Collins to rest our weary feet.

It may not be the sexiest feature Kontent has ever released, but its new Audit Log is still going to be very attractive to any enterprise customer or administrator looking for a full history of all changes within their cloud-based headless CMS.