Anyone who has worked with or for (or against) a digital/web agency has probably encountered issues with browser support. When Luminary got started (sorry, we had to say it!) the better part of 14 years ago, Windows 98 was the latest and greatest operating system, and came packing Internet Explorer 4. Its biggest competitor was Netscape Navigator.

The browser battleground is now far more diverse, dynamic, and competitive. Multiply that by the factors introduced by the range of web-browsing devices out there today, and suddenly browser support starts to look terrifying to the humble web developer.

In this post I’ll look at the current browser situation as it affects web developers, and attempt to explain how we go about browser support, or more correctly, how and why we don’t!

So what exactly is a browser?

A few years back, Google hit the streets in New York to ask the people that question, with hilarious results:

Simply put: a web browser is an application that allows you to browse the world wide web.

Most reasonably tech-savvy people have heard of these:

The more nerdy among us have heard of these:

A browser actually consists of many parts:

Any one of these elements could have an effect on how a website is displayed, without even taking into account the operating system and screen.

This makes it extremely complicated to support browsers!

What percentage of users are using which browser? It's very difficult to get a good picture of browser share, because it varies by so many parameters.

For example, in February 2013 when this post was being written: 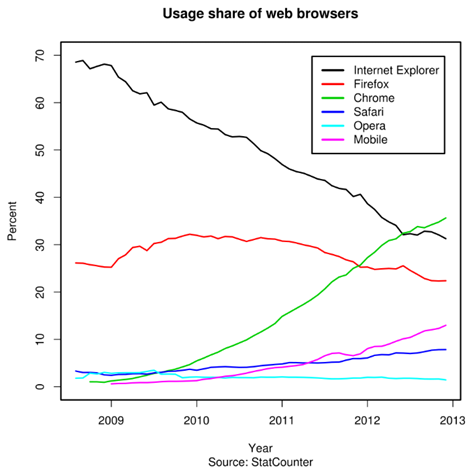 Warning: charts like the one above probably don't help

Basically, there is no reliable, across-the-board measure of browser share. It needs to be looked at with fresh eyes for every new situation. Are you building an intranet for a government department with IE8 installed on every PC, or are you building a design-focussed blog targeted at young graphic designers?

We regularly receive requests such as this:

"Can you please ensure the website displays correctly in all browser and operating system combinations?"

Unfortunately, in most cases, the answer is no! There are a huge number of OS/Browser combinations, especially when you consider different versions of the same browser. There are literally hundreds of combinations, and even that is before considering emerging platforms such as Windows 8 (IE10+) and Windows Phone.

The problem with versions
... or more specifically - version numbers

The following stats were prepared on 6 August 2012, when I first presented the subject of this post, but I’ve kept them for a reason! The stats analysed were of a very highly trafficked Australian website. I’ve listed the overall share of each browser, the current (up to date) version number of that browser, the oldest version that still represents a significant portion of visitors ("popular") and the oldest version people seem to still be using ("still alive").

At the time of writing this blog post in February 2013, these numbers have already changed dramatically. Just looking at the most popular three browsers - the current version of Chrome has increased by four from 21 to 25, Firefox has gone up by five from 14 to 19, and IE10 has officially been released with Windows 8. Just about every number in that chart from nine months earlier is already out of date. In fact, there’s a decent chance that by the time you’re reading this blog post, these corrections I'm discussing are already out of date!

So what the hell is going on?

The mathemagicians among you will have noticed that this version number explosion can't have been going for ever. We can blame Google Chrome for setting the trend of rapid releases.

"The concept of rapid releases established by Google Chrome prompted Mozilla to do the same for its Firefox browser. On June 21, 2011, Firefox 5.0 was the first rapid release for this browser, finished a mere six weeks after the previous edition. Mozilla created four more whole-number versions throughout the year, finishing with Firefox 9 on December 20, 2011."
http://en.wikipedia.org/wiki/Browser_wars

If we combine these numbers, there's a new major version of a widely-used browser, around once a fortnight on average. This is shorter than our shortest project timeline, meaning it is practically impossible to guarantee support at launch for specific browser versions when writing our proposals.

So which browsers do we test in? Short answer: it depends.

Each project is likely to have different requirements. We research the client's and project's needs, using a variety of tools and guides:

There are some things we avoid when committing to a set of browsers to target and test against, and for good reasons. For example:

What CAN we do to cover as many browsers as possible?

This all sounds very restrictive so far. Obviously we can't just put the headphones on, turn up the music and build for only the latest version of Chrome. We try to ensure that sites work well in as many browsers as is feasible, in a number of ways: 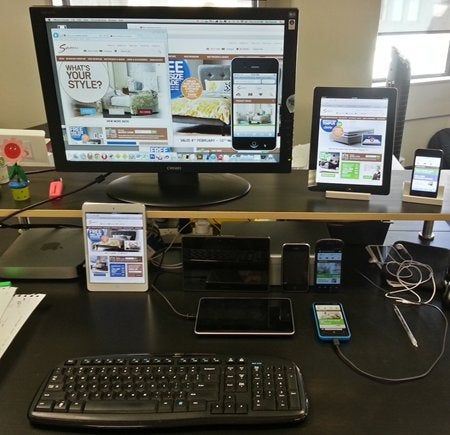 (Look out for a dedicated blog post soon on our testing suite!)

So... come on... which browsers do you support?

Because of all of this - Luminary has no standard set of browsers and versions that we target and test in. What we do have is a starting point to help us put together a list for a project, which we change specifically for every proposal we send out. If you're a client of ours, you might have seen something like this in your proposal:

We will test and ensure that your site works well in these common Operating System standard browsers:

* Chrome and Firefox employ a "rapid release cycle", which means a new version is released approximately every six weeks. We will test and ensure that your site works well in the latest current stable release version at the time of Luminary's testing and quality assurance.

In the the last few years, the browser and device landscapes have changed dramatically. It's no longer IE versus Firefox with Chrome sniffing around. We now have to contend with literally hundreds of different combinations of platforms, operating systems, browsers, JavaScript frameworks, and their different versions and features. The notion that one can implement a feature and simply "test across all devices and browsers" is now approaching an impossibility.

The best way to approach this situation is to embrace it. Accept that there are myriad combinations of device, platform and browser, and look to employ best practices and emerging techniques such as standards-compliance, responsive web design, to try to ensure that your product works in as many situations as possible. Focus on quality and don't tolerate specific browser hacks. Research the project's specific requirements, and pick your battles. Follow the principles of graceful degradation and progressive enhancement to provide a useable experience for all browsers, not just those you're targeting. Build up a test suite and test, test, test! And crucially, communicate clearly so that everyone is on the same page.