A Bali-Australian legacy that connects

The Bali bombing of 2002 was a near miss for one of our team members. Years later we connected with a children’s shelter that was established in honour of one of the victims of that tragedy.

People were having a great time, 28 degrees, the music blaring, the drinks flowing, a standard night in Bali’s entertainment precinct. Marcus was talking to some players from the North Melbourne Football Club when he decided he had had enough drinks and it was time to go home. He wandered out the front, turned left, and walked past a long line of cars in the crammed streets. He eventually realised he had gone the wrong way and turned around and wandered back past the Sari Club where the place seemed to be jumping. He thought about going back inside as they all looked to be having so much fun.

He is not sure what sent him home, but a few minutes later he closed the door to his hotel room and was confronted by a thunderous bang. The building shook. He looked up out the window and saw a massive glowing mushroom cloud of smoke and flames. It looked like a bomb had gone off.

On the 12th of October 2002, a massive 1 tonne car bomb was detonated in front of the Sari Club. Marcus hadn’t noticed the Mitsubishi L300 van out the front of the nightclub carrying the explosives in 12 plastic filing cabinets. Nor the 150 metres of detonation cord. The detonation caused a very large, high-temperature blast creating a crater in the road and igniting what was left of the Sari Club. 202 people died, including 88 Australians and 38 Indonesians.

Marcus was lucky. His sliding doors moment allowed him to survive. He went on to have three amazing kids, Tyla, Dusty and Jesse. Marcus continues to work with Luminary to this day, providing a direct link for his Bali and Australian colleagues to this devastating event that impacted so many. 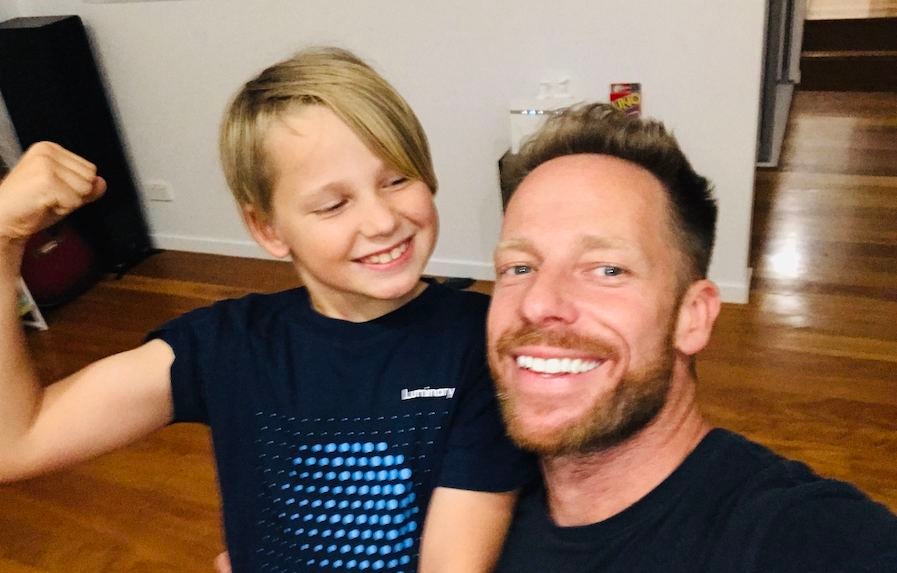 Marcus doesn't know why he changed his mind about going back into the Sari Club, but the decision possibly saved his life.

There are many stories from that night. People flying in as the bomb went off; people who stopped in for a quick drink; others who had Bali Belly and did not meet up with their friends that night. Many had a near miss. Many others didn’t.

One of the victims was Jodie O’Shea. She survived the bombing though was badly hurt. She lay in a hallway in one of Bali’s overrun hospitals.

She held Jodie’s hand for a few days, noting that Jodie continually denied pain relief which was in short supply, to ensure that others were looked after. Alison didn’t realise the extent of the burns that would eventually take Jodie’s life, five days later in Royal Perth Hospital. Jodie’s sacrifice had a profound and lasting impact on Alison’s life. She set up Jodie O’Shea House in her honour, for Indonesian children that have been orphaned, abandoned or living in poverty.

“Sharing Jodie’s last hours was an incredible and life-changing privilege,” said Alison. “It left me with a deep understanding of the fragility of life on this earth and a driving passion to do more. Helping poor Indonesian children seemed like a good place to start, as I already knew of children nearby who were living in an abusive institution. Thanks to initial donations (totalling just 20,000 USD) and together with my wonderful husband Yanto, we were able to start. From then on, children just started turning up and groups stayed at our house until we could get enough funds to move into the premises that we now call Jodie O’Shea House.”

Luminary opened in Bali in 2016 to support a developer who we really wanted to work with. As the team grew, we received this feedback in a survey: “It is great that you are here in Bali, but to really be here, you need to support the community, like you do in Australia”. So we took on the feedback and searched for an organisation that supported the community and had a connection to Australia and to our team.

We found Jodie O’Shea House and after understanding their mission and hearing Alison and Jodie’s story, we found our community partner. An organisation that linked our team in Bali and Australia to the local community through an event that impacted both cultures and directly impacted one of our team members. It was clearly apparent that Marcus could have perished in the explosion, as Jodie did.

Something wonderful came out of that terrible night – Jodie O’Shea House (JOSH).

When you meet these happy kids who are filled with love and joy, you connect instantly. Like most kids, they just want to play and throw a basketball your way on arrival. With so many kids and only five adult carers, the interaction with visitors can provide attention, fun and develop English language skills.

After many visits to JOSH, we have been able to watch the kids grow and develop. As they have many visitors from Australia and other countries, they don’t know your name, but the connection remains. As COVID has ravaged many parts of the world, including Indonesia, Bali thankfully has had fairly limited impact from the virus. However the economic devastation due to travel restrictions has devastated the tiny island.

The impact of these bombings brought Australia and Indonesia close together like never before. Australia recently bought the land that the Sari Club was on, intent on preserving the site as a memorial to all who died and as a reminder of our close connection.

Jodie inspired Alison to create a safe place for kids. A place where kids can thrive. In the wake of the tragedy, a legacy was created that forever connects these two great countries and changes the lives of the people who visit it and the lives of the children who rely on it. It will forever have a positive impact on their lives and the minds of the Luminary team.