Is the internet evil?

Webby Awards Executive Director Claire Graves recently presented to the Luminary team as part of the 2019 Webby Talks world tour. The subject up for discussion was 'how the internet exploits our thirst for a good fight and leaves us wanting more’.

There is no question that the internet – and social media, in particular – has brought people together on an unprecedented scale. But has it actually brought humanity closer together? Webby Executive Director Claire Graves says an emphatic ‘no’.

Graves was speaking to our team as part of the 2019 Webby Talks world tour on Tuesday 26 November. Now in its ninth year, Webby Talks – presented by the prestigious Webby Awards – provides an in-depth look at a current trend happening in the online world. The tour takes in those who are “making the internet” around the world, visiting brands, companies and agencies across 16 cities and nine countries.

The theme for this year’s talks was ‘Under the Influence: How the Internet exploits our thirst for a good fight and leaves us wanting more’. Graves talked about how social media exploits our human desire to engage with controversy, creating a feedback loop of provocative content and leaving us angrier and more polarised than ever before. 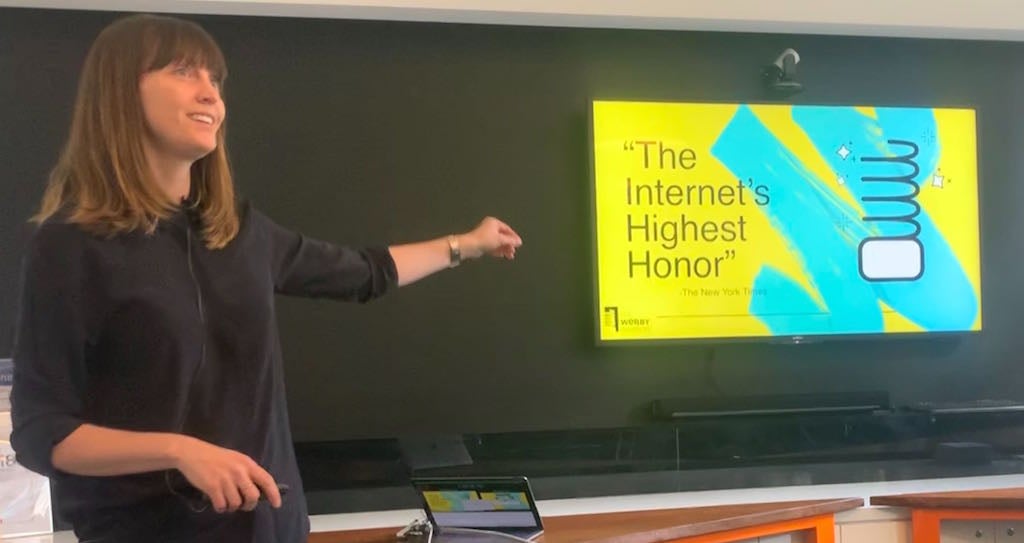 The evidence is everywhere

A Facebook post inciting heated debate about whether Serena Williams is a role model or a bully after her outburst in the finals of the 2018 US Open… Outspoken American TV personality Chrissy Teigen at war with Trump on Twitter… nerd wars about the pronunciation of the word ‘gif’... food fights over whether a hot dog is a sandwich… people losing their minds over bagels sliced like bread… a mother railing against “childless millennials” taking up space at Disney World… even a poll that went rogue on the Twittersphere about whether you should wash your legs when you shower.

Do you wash your legs when you take a shower?

While they might seem like a reasonable form of entertainment at the time, Graves argued that these kinds of fights are finding their way into wider social conversations. “We are wired to defend ourselves – it’s human nature – and we’re also wired to watch drama take place in front of us.” The growth in social media has only fueled this trend, she posited, citing writer Clay Shirky’s Ted talk where he suggested that “The more ideas in circulation, the more ideas there are for any individual to disagree with – more media leads to more arguing”.

Even though there are a lot more people watching from the sidelines than dueling it out in the metaphorical ring, the more we engage with this sort of material, the more we encourage its presence, through social media algorithms. Add to that the fact that 40% of traffic on the net last year was from bots, which are designed to emphasise controversy, and you have a destructively self-perpetuating cycle.

In a recent survey of 4000 people conducted by Webby Talks, 73 percent said they thought they were missing out due to social media algorithms. When asked what they actually wanted to see, only three percent said arguments. Fifty-four percent said they’d participated in a fight online and 18 percent admitted that their social media consumption makes them more combative in the offline world.

What does this mean for makers of the internet?

The Webby Talks survey revealed that there are three main things that people want from the internet: to connect with friends and family, to be entertained, and to learn.

So what should we take from this? One of Graves’ key takeaways was that even though bots and algorithms reward and contribute to controversy, that isn’t the only way to gain attention. Instead we should be making more of an effort to listen to what the consumer wants and using 'Entertainment, Community and Experiences' to combat the culture of fighting that currently exists on the internet.

To illustrate the point, she highlighted some examples of recent Webby Award entries. Here’s a snapshot.

Far from seeing social media and technology as the enemy, The New York Public Library has embraced technology to bring new life to classic novels, recreating them as Instagram Stories. The initiative saw the library gain 140,000 new followers and resulted in over 300,000 reads of the insta novels.

Fashion label Ralph Lauren united tennis fans by releasing an ad campaign on TikTok celebrating the U.S Open and encouraging users to post videos of themselves winning in life, under the hashtag “winningRL”. The ones with the most engagement were rewarded with Ralph Lauren tennis gear.

Calling All Will Smiths - Bright

Creative agency We Are Social was briefed to promote the Netflix movie Bright, starring Will Smith, in Australia. It got Will Smith (the actor) to record a callout for real Aussie ‘Will Smiths’ to stand in for him in promoting the movie. Sixty ‘Will Smiths’ were recruited, with Netflix’s social content driving over 13 million impressions in Australia alone. Bright became one of Netflix's most-watched pieces of original content.

The upshot of all this is that, as makers of the internet, we need to rely more on creativity rather than controversy to win people’s attention. Then hopefully we can all do a little bit more #winningRL and make the internet a little less evil.