To feed nine billion people, something has to change

In the next 20 years the planet will reach nine billion people. At up to 27 billion meals per day, we will need a new approach to food production.

In just 20 years (by 2039), the world is likely to have nine billion people. That’s nine billion people who need clothes, jobs, transport and ultimately water and food. Scientists say that this is the ‘carrying capacity’ of the planet – meaning we will face an extraordinary strain on the earth’s resources.

China and India currently have a combined population of nearly three billion and their food trends are changing. Since 1981, China has lifted over 850 million people out of poverty. This is an exceptional achievement. The next challenge is that with a growing middle class in China and India, the consumption of meat is drastically increasing. It is possibly lucky that cows are sacred in India, or the demand for beef would likely put increased pressure on both meat prices and the environment.

Animals that are grown for food have a huge impact on our environment. For example, while it is becoming common knowledge that livestock production is the second largest contributor to greenhouse gas emissions, not many people know it takes up to 15,000 litres of water to produce a kilo of beef (Source: Institution of Mechanical Engineers (UK)). Yep, 15,000 litres for a single kilo! And before you say Australia’s beef consumption has steadily declined since the 1970s, current research shows that Australians continue to eat an average of 25 kilos of beef per year. Beef consumption per capita therefore requires 375,000 litres of water every year. To put this into perspective, the average Australian uses 124,100 litres of water per year for drinking, washing and daily showers! Or think of it this way: having a beef-free meal saves significantly more water than skipping a shower (around 5000 litres of water for 300 grams of beef compared with 55 litres for a shower).

The protection of animals and the environment, along with a belief that it provides a healthier lifestyle, has created a movement towards becoming vegetarian and vegan in the western world’s major cities. Tech companies around the world have seen this trend and are already developing alternatives to meat, often through engineered food.

The mainstream development of plant based protein is exciting and the market is starting to respond. In 2019, Americans will spend nearly US$900 million on plant based alternatives to meat.

Australians and Americans love burgers. Available on most corners, burgers symbolise abundance and convenience. For many people, fast food chain mass marketing and the ability to eat them on the go, makes burgers the natural choice when eating out of home.

For those who love meat, there are many similarities between beef and the plant based protein, making the experience of eating a plant based burger close to the original. In the US, Impossible Foods has developed a burger that is a far cry from the original veggie burger style products of the past. Burger King has announced that it will sell the Impossible Burger throughout the US, raising Impossible Foods’ value to over US$750 million.

In Australia, plant based protein alternatives are becoming mainstream. Lord of the Fries burgers are entirely plant based and are appealing to the traditional fast food audience, as well as some vegans. Hungry Planet is the main supplier of plant based meats in Australia. They focus on meat lovers with the aim of recreating the tastes and textures that meat eaters are used to.

Plant based proteins are beginning to become available across many food categories. Ready-made meals have increased in popularity as time poor professionals seek to reduce time spent on food preparation. Meat is the main ingredient in most ready-made meals and finding meals without meat has long been constrained to the salad fridge at the supermarket. This is about to change. Coco and Lucas plant based protein meals were launched in Woolworths Supermarkets in July. With the first delivery of nearly one million plant based protein ready-made meals to Woolworths, a new market is emerging. Australia consumes around 75 million meals per day, so one million meals across a week or a fortnight may not seem significant. However, it is significant as a starting point and if accepted as a genuine option for one meal per week, it may represent a five percent reduction in meat as part of many people’s diets.

At Luminary’s 20th birthday party, chef Diem Fuggersberger from Coco and Lucas, supplied a range of delectable canapés that made it difficult to ascertain whether they were meat or not. One of our clients declared “I can assure you that that is chicken!” The response was “I can assure you Sir, that is definitely a plant!”

Economics may play a part in the adoption of plant based protein. With the price of lamb recently skyrocketing, it is likely that people will consider plant based alternatives to traditional meat.

It is not expected that vegetarians and vegans will rush to embrace meat alternatives, as many are turned off by the taste of meat. However, they will probably be thrilled at the concept of both saving animals and creating sustainable diets.

If there is a major shift to plant based protein, we could potentially deal with the environmental issues that feeding nine billion people will create. The added benefit will be ensuring the stability of our global food supply. Imagine if third world nations were able to grow plant based protein and finally be able to consistently feed their people?

Ultimately it is unlikely that the traditional meat based Australian BBQ will go out of fashion, however plant based protein will take up space on the BBQ this summer.

Humanity has always found a way to adapt and survive, The next 20 years will have it face its ultimate test – evolve or perish. 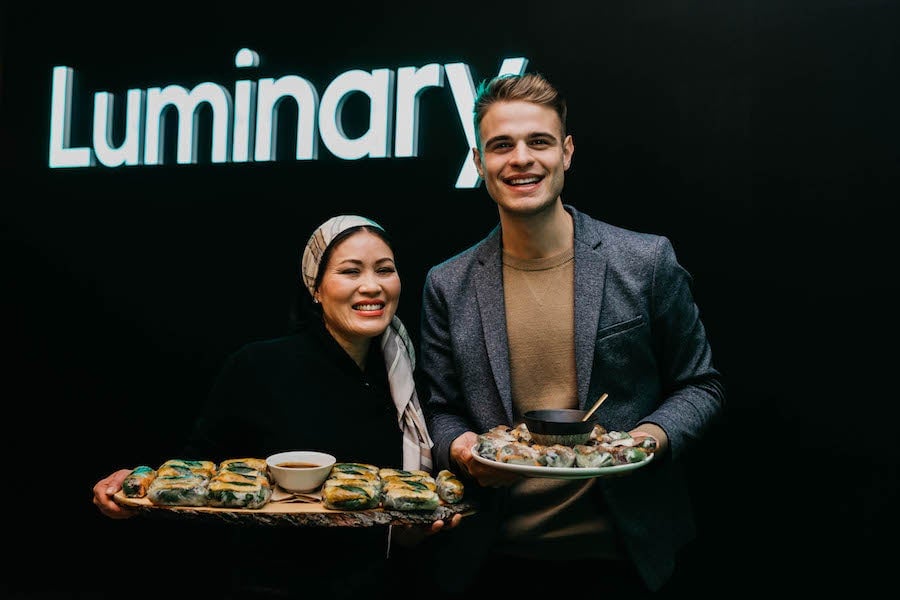 At Luminary’s 20th birthday party, chef Diem Fuggersberger from Coco and Lucas supplied a range of plant based canapés.