Doin' it in a dress

We like a good party here at Luminary, but usually it’s the girls who don the frocks and frills...

This week, two of our own frocked up and joined the fray. Luminary CEO Marty Drill and Support Technician Nic Jonson rocked the frock this week to raise funds for a very worthy cause - a charity whose mission is to make education accessible to some of the most disadvantaged young women in the world.

One Girl was co-founded in 2010 by former Luminary staffer Chantelle Baxter, following an eye-opening trip to West Africa. It was here that Chantelle learned that a girl born in Sierra Leone is more likely to be sexually assaulted than she is to go to high school. One Girl’s philosophy is that when a girl is educated, her whole life changes. So, every year in October, One Girl urges guys to get on board with the ‘Do it in a Dress’ campaign to raise funds and help the charity achieve its aim of educating one million girls across Africa by 2020.

Last Sunday, Luminary CEO Marty Drill answered the call to ‘wear a school dress for those who can’t’, taking to the streets of Melbourne in a dress as part of the Melbourne Marathon festival. A self-confessed non-runner, Marty completed the 10km event. “Generally I can run about 2km before wanting a wine or coffee,” he commented. “So it’s safe to say 10km is outside of my skills, experience and comfort zone.”​

Marty, who is a director of One Girl, has supported the charity from its inception. Explaining his motivation for getting behind the organisation and the ‘Do it in a Dress’ campaign, Marty said: “I believe that educating women increases their chances in life to prosper, that education provides them with opportunities not otherwise available to them. I also believe that educating women reduces their risk of rape, unwanted pregnancy, unwanted early marriage and STDs. In Sierra Leone, women in school dresses are left alone. The school dress is a symbol to the community. A symbol that something else is possible.” Support Technician Nic Jonson brought the One Girl message to work on Wednesday, sporting a frilly black pirate-inspired number and stripey tights for the day. (Nic stopped short of shaving his legs for the occasion - lucky for him, the steamy weather made way for a more woolly-tights-friendly cool change.)

For Nic, supporting One Girl was about recognising that there are others who are less fortunate in the world. “I've always admired those who donate to worthy causes, those who manage to get off their behinds and actually do something to help out the rest of the humans on this planet,” he said. “But I've rarely been in a financial position to do so myself. Hopefully this can rectify a little of that missing contribution on my behalf. Plus, I'm always happy with an excuse to frock up. I've also been wanting to do this since the One Girl project started.” 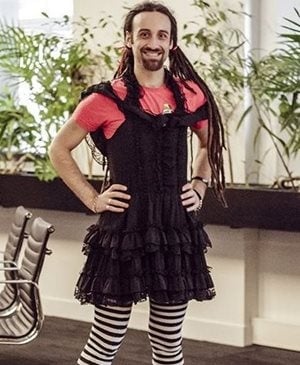 Nic would like to add that he is available for interviews. In the dress.

It’s not too late to donate to Nic and Marty’s ‘Do it in a Dress’ campaigns.

More information about One Girl: www.onegirl.org.au/what-we-do 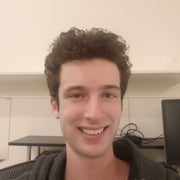